While I’m on the subject of products I really want to see, I would be remiss of me not to mention the spreadsheet-wiki. This one should already exist by now, and I hold myself largely responsible for it not — after all, I spent almost a year working with Dan Bricklin and Socialtext trying to make it happen. When we parted ways, I hoped to be able to continue the project, but, for a variety of reasons, that never came together either. There have, from time to time, been vaguely encouraging noises from Socialtext, but this still doesn’t seem like a high priority for them, and the information that leaks out from time to time implies they’re still going down a different path. I’ve deliberately held back from talking about some of this stuff to give them a chance to get something out, but it’s 18 months now since I left, any inside knowledge I had is long past its sell-by date, and I really want to see this come together from somewhere.

By far the most common response when I tried to explain to people what I was working on, and what a spreadsheet-wiki actually meant, was “Oh, you mean like Google Spreadsheets?” But Google, and their online spreadsheet rivals, aren’t really creating what I want. Google Spreadsheets is no more a spreadsheet wiki than Google Docs is a text wiki. Yes, they’re great for collaboration, but that’s only half the wiki story. The critical other ingredient on a wiki is the humble link. Even outside wiki-land the power of the hyperlink is still poorly understood and massively underrated. It’s the fundamental building block of the Web, but even still hasn’t lived up to anywhere near its potential. Almost everyone, when they talk or write about Wikipedia, focuses on the “Anyone Can Edit!” part (whether with awe or despair), but the vast majority of readers never edit anything—the key for them is that absolutely everything is a link: 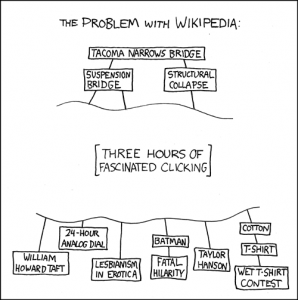 My dream is that that could also be true for numbers.

Wikipedia, of course, is full of numbers. People can talk about them, change them, cross-reference them, and do all manner of wiki goodness with them. But that’s not enough. Those numbers currently live in splendid isolation. They can’t interact in a spreadsheety way.

There have been various attempts to fix this, generally involving embedding spreadsheets into wiki pages as a replacement for plain tables. But although that achieves the goal of being able to perform some basic calculations in-place, it’s no better than being able to embed an Excel sheet in a Word document. It doesn’t solve any of the well known problems with large spreadsheets (aka Spreadsheet Hell). In a spreadsheet-wiki the spreadsheet should not be a second class citizen, subservient to the wiki. Rather, the spreadsheet should itself contain wikiness. Forget simple single sheet spreadsheets; I’m talking here about hundreds or thousands of properly cross-linked sheets, all mutually feeding each other. Forget having to email around your monthly financial statements comparing actuals to budgets with everything gradually drifting out of sync as no-one is quite sure which is the master copy any more, and no ability to examine how you got to what you have. In a spreadsheet-wiki every number is a link. You can see where it came from, and where it’s being used. If an assumption changes, everything that depends on it automatically changes. No more wasting 3 weeks in a dead end because you were working from old numbers. No more wondering why that P&L entry for “Miscellaneous Expenses” was so high in March. No more wasted time collating projections and forecasts from department heads, harmonising them into a divisional budget for the upcoming year, only to have to redo the entire process 4 times when the CFO trims your budget, or the COO explains some of the impact of a new office opening in in September. Instead everyone can work on their own page, have the data pulled automatically into a series of other sheets, and have changes take effect universally and instantly whilst everyone hammers out the details — with, of course, full transparency of who changed what when (and hopefully why), and the ability to roll-back to any earlier stage.

Most of the technology to make this work already exists. There are some interesting issues when you start talking about thousands of inter-related sheets, but that can evolve when we see what the real usage patterns are. Making something come together that will show just how powerful a concept this is, is mostly just a matter of vision, SMOP, and tuits. Like any of my other ideas, I’d love to work on it, but I can’t build it on my own. If you’re interested in working with me on it, or just building it yourself and picking my brains from time to time, please get in touch.

5 thoughts on “What is a spreadsheet-wiki?”