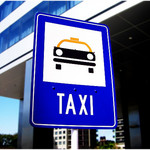 For the last few weeks I’ve been travelling in Latin America, swapping the -30ºC of Tallinn for the +30ºC here. One thing I’ve found somewhat odd is the elaborate system of taxi pricing that several places have.

I encountered this first in Brazil. The taxi would arrive at my destination, with the meter reading, say, R$14.10. As I dug through my wallet looking for R$15, the driver would produce a printed chart and point at the box that translated the meter price into him actually demanding R$17. At first I thought this was some sort of elaborate scam on foreigners, but then it was explained to me that it’s a complex system to cope with the high rate of inflation, where the meters only get adjusted every 6 months, but every quarter there’s a new chart that ups the price in the interim. Last night I got a cab in Montevideo which took this to its logical extreme — the meter didn’t even bother with displaying prices at all: it just had a counter, starting at 1, and clicking upwards until you arrived at your destination, at which point the driver would look up the 53, or whatever, on his chart to tell you how much that cost.

It’s a fairly simple system, with some obvious advantages for drivers, but it seems remarkably unfriendly for passengers in general, and even more so for tourists. Although in many places being a tourist carries with it a presumption that you’re going to get ripped off, actually being so tends to leave a lasting negative impression on your overall view of a country or city. And tourism is one of those things that can make a huge economic difference to somewhere, so it’s worthwhile making the experience as pleasant as possible. Brazil in particular has a reputation of a place where you might actually be physically unsafe as a tourist, so lots of cities have Tourist Police who patrol areas frequented by tourists, looking out for common crimes, and speak multiple languages. I don’t have any information on what the actual effects of that are, but even making people feel safer presumably has lots of useful benefits.1

I was particularly pleased to note that Rio has implemented a similar nicety for taxis too. If you arrive on one of the (very pleasant) long distance coaches, the taxi rank outside the Rodoviária has a dispatcher who asks where you’re going, passes that information to the next available driver, and hands you a sheet of paper telling you the fixed-fee price to that destination. I first encountered this at JFK many years ago, where there’s a similar fixed-fee to anywhere in Manhattan, which you’re told up-front by someone other than the driver, making you feel pretty sure you’re not being ripped off. This sort of thing is really simple and really effective at improving the experience of travellers.

For all I love about Estonia, this is one that they seem to get wrong, and in the last year or so it’s gotten worse. Taxis are regulated to the extent that they have to prominently display their prices, and must give you a receipt (otherwise the journey is free). But the average tourist is going to have no idea what a reasonable rate is, and there are some taxi companies who notoriously wait outside hotels frequented by Finns, charging five times the average rates. From the airport there are only a small number of taxi companies operating, which cuts down on the chances of being ripped off, but a new bus company has started operating a single line to and from the airport, and which has a habit of pulling up at the bus stop approximately two minutes before the normal city bus (which is half the price).

In most areas of life I’m not a hug fan with interfering with the market. But a market only works well with a good information flow, and tourists tend not to be well informed. Saying that they should be, and that it’s their own fault if they’re not, doesn’t really work so well. My suspicion is that if you actually want tourists2, you need to make certain adjustments to cope with them (e.g. not necessarily expecting everyone to be able to speak the local language), and I suspect that what might otherwise be over-aggressive meddling with tourist-heavy transport infrastructure is one area where the second-order effects are more valuable than any initial problems caused.

It’s entirely possible, though, that I’m just promoting my own desires as a frequent traveller (and one who’s never well enough prepared or educated about the places I’m visiting) into areas where actually they’d be detrimental. So I’m certainly willing to be pointed to research on this, or hear arguments as to why it’s a really bad idea. But arriving into Rio after dark and simply being told that it’s a flat rate R$35 to Ipanema was such a pleasant surprise, that I’m hoping it’s not, and that more places will copy it!

One thought on “Tourist Taxi Treatment”